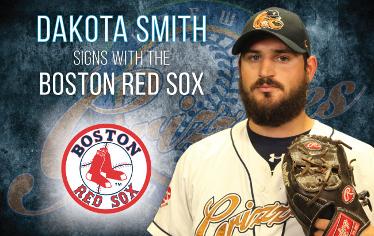 "I'm thrilled for Dakota Smith to be able to sign a professional contract with the Boston Red Sox organization," Kansas head coach Ritch Price said. "Smith had an outstanding career at KU as an outfielder, and I want to personally say 'thank you' to Phil Warren and the Gateway Grizzlies for giving him an opportunity to make the transition to the mound. He has a big league arm, and I wish him the very best in chasing his dream of becoming a big league pitcher."

Smith leaves the Grizzlies after compiling a 2-1 record and 2.25 ERA in 40 innings pitched in 2016. He struck out 42 batters, walked eight and allowed 23 hits. He signed with Gateway on June 21, 2015, after completing his senior season with the Jayhawks.

The Leavenworth, Kansas, native was a four-year starter for KU in the outfield and a career .280 hitter with 12 home runs and 126 RBIs in 194 games played. He appeared in 19 games for Kansas out of the bullpen during his career posting a 1-2 record with a 3.67 ERA.

Former student of Patton Jr. High Ricky Fergerson
Ricky Fergerson is a speedy walk-on-turned-scholarship-player in his third season in the Appalachian State backfield. Ricky still holds at least one track record at Patton Jr. High.
In High School he earned all-conference and all-area recognition after rushing for 1,032 yards (7.9-yard avg.) and nine touchdowns as a senior. He also caught 17 passes out of the backfield for 275 yards and four touchdowns in final prep season.
Ricky still keeps in touch with Patton Jr. High teacher Lori Wilcox and has promised her a Super Bowl ticket one day.